Adfactors PR is Agency of the Year at IPRCCA 2016 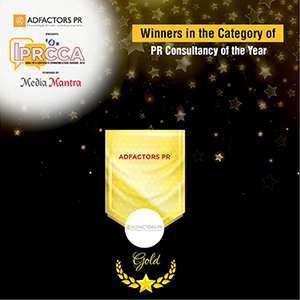 Adfactors PR made it seven-in-a-row, when it won the Agency of the Year title at the India PR & Corporate Communications Awards (IPRCCA), hosted by exchange4media, this evening.

With this, the firm has won every single Agency of the Year award in 2016 in India/South Asia/APAC. The other awards – in reverse chronological order – are:

The jurists, notably, conferred the Lifetime Achievement Award for Public Relations to Adfactors PR chairman Rajesh Chaturvedi for his contributions to the industry and guiding Adfactors PR to become India’s largest PR firm. Separately, Hemant Batra, senior vice-president with the Financial Services practice, was chosen as the PR Person of the Year for his commitment to the profession and the firm, his work, the awards won, and the business impact of his work.