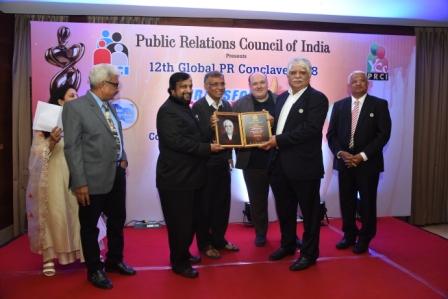 PUNE: Barun Jha, joint editor of Press Trust of India (PTI) and Madan Bahal, Managing Director of Adfactors have been felicitated with prestigious PRCI awards at the 12th Global Communication Conclave held at Pune over the week-end.

Barun has won the Chanakya Award under media person of the year (print) and Chandramohan Puppala under electronic categories, while Madan has been felicitated with the Communicator of the Decade (K R Singh Memorial award). 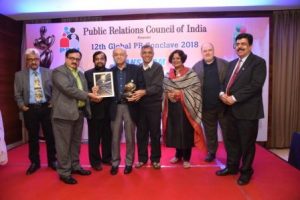 Most experienced film and entertainment professional Amit Khanna has been awarded the Communicator of the Year under Films while young writer Varsha Seshan under literature.

G Srinivasan, CMD of the country’s largest non-life insurer New India Assurance Company Limited has been honoured with the Financial Communicator of the Year award.

Cochin Shipyard has won the Corporate Citizen of the Year award, India’s second largest tractor maker TAFE the Communication idea of the year (for Farm Dost) and CMS Infosystems the Organisation of the Year for Excellence in PR.

Here is the complete list of the awardees under various categories:

The Following were inducted into the PR Hall of Fame