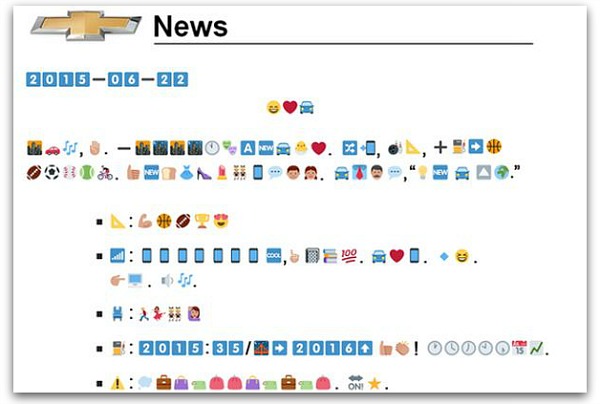 Chevrolet issues an all-emoji press release to announce the 2016 Chevrolet Cruze. An innovation in the way a media release is issued is something worth admiring and commenting.

The introduction to the press release was as follows:

Words alone can’t describe the new 2016 Chevrolet Cruze, so to celebrate its upcoming reveal, the media advisory is being issued in emoji, the small emotionally expressive digital images and icons in electronic communication. Try and decode this news or watch for the decoder at 2 p.m. EDT on Tuesday. #ChevyGoesEmoji

This definitely became the talk of the town and attracted several eyeballs.

As reported by Ragan, “I don’t blame them for going emoji. With a product starting at around $16,000, those who frequently use the emoji in daily communication are the Cruze’s target demographic”.

The report further mentioned that earlier Domino’s launched the order-with-pizza-emoji in May. But it is the first, as far as we can tell, to offer a press release all in emojis.

Do have a look at the interesting all-emoji press release, link below: