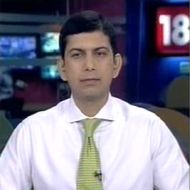 Udayan Mukherjee, Managing Editor, CNBC-TV18 has decided to step down from his full time role, after 15 years of service with the group, the Network18 Group said in a press release on Wednesday. Shereen Bhan, Executive Editor, CNBC-TV18 will take over responsibility of the day-to-day running of the channel as its new Managing Editor from September 1, 2013.

“The reasons for this change are entirely personal. Udayan has been facing issues of professional exhaustion and wants to devote more time to other pursuits of personal interest,” the release said, adding that Mukherjee would continue his exclusive association with the group in a contributory and consulting role, through a mix of events, shows and appearances.

Speaking on this development, Raghav Bahl, Founder and Editor, Network18 said: “Udayan has contributed to the emergence of CNBC-TV18 as a benchmark in business news since its formative years. He has ably led the team to many successes and we wish him the very best in his new avatar at CNBC-TV18. Shereen has all the skills and experience to take this mantle forward and we look forward to her leadership.”

Commenting on this, B Sai Kumar, Group CEO, Network18 said, “Udayan has been instrumental in making CNBC-TV18 the success it is today. We thank him for his invaluable contribution and look forward to his new role with us. In Shereen we entrust the task of leading CNBC-TV18 onto new levels of growth and leadership.”

Commenting on this transition, Udayan Mukherjee said, “I have had a rewarding and enriching 15 year stint with Network 18, but of late the responsibility of running the channel had become repetitive and I had a difficult time motivating myself to continue. At this stage of my life, I need to devote more of my time to other personal passions and interests. CNBC-TV18 has a very talented team in place which will ensure that the channel’s high standards are maintained in the future. I wish the new editorial leadership team the very best and will try, in my limited way, to contribute to its success.”