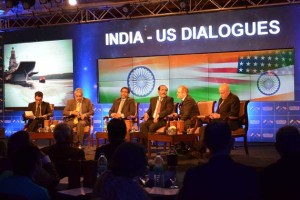 In the lead up to President Obama’s historic second visit to India, Network 18 in association with The Observer Research Foundation (ORF) organized ‘The India-US Dialogues’ to explore the past, present and future of Indo-US relationship. The conclave was attended by the top policymakers from both India and America, who discussed shared challenges and common goals in an effort to chart a blueprint for an ambitious & constructive India – U.S. strategic partnership.

The day one of this conclave was a curtain raiser on the 24th of January that touched upon the key areas that are shaping the relationship between the two countries. This was followed up by detailed panel discussions on the 25th of January, where some of the most respected names in their areas of expertise put forth their views on four significant topics – trade and investment, Regional Security Challenges, Energy Security and Sustainable Development, & Defence and Technology Cooperation, providing the audience with informed, in‐depth analysis of what President Obama’s visit means for the potential of our bilateral ties, and at the same time ideating on out‐of‐the‐box solutions for the two governments.

As the panelists spoke on widespread issues like IPR, visas, ease of business, contentious issues of World Trade Organisation (WTO) negotiations and Climate Change, the general consensus was that the new government in India, led by Prime Minister Modi is taking the relations between the two countries to greater heights.

Some of the key highlights from the conclave;

Ravi Shankar Prasad, Minister of Communications and Information Technology commented that the Indo-US Relationship is obligatory for having a stable and peaceful world. Also he laid emphasis on the Digital India mission which will empower the poor by bridging the digital divide.

Diane Farrell, acting President US-India Business Council complimented India’s new government “steadfastness of purpose” that inspires the confidence in US investors. Also, she expressed opinion on US & India should sign a bilateral investment treaty so companies will come to India.

Vikram Singh, Vice President, Centre for American Progress shared at the conclave that the Next leap in defense is going from buying to co-production, working together to meet aims, reduce costs.

Chairman of the Mahindra Group, Anand Mahindra in his special address stated that trade and investment could be looked as an ambassador to global peace in the era of terror.

Suresh Prabhu, Union Minister for Railways left the audiences on a positive that the nuclear deal success is only a starting point for India-US cooperation at Republic Day visit.

Commenting on the initiative, Umesh Upadhyay, President, News, Network 18 Group said, “It was an honour to host the key domain expert as they collaborate and discuss the most pressing issues for both the countries. We have, through The India – US Dialogues, made an attempt to analyze the impact of President Obama’s second visit to India on economic development and strategic partnership between our nations.”

Sunjoy Joshi, Director, Observer Research Foundation said, “With the India – US Dialogues, we are pleased to have begin an annual initiative, bringing eminent personalities together to discuss and espouse the solutions that will help the two nations to further cultivate their relations and get together on the path of growth.”

Adfactors PR Pvt. Ltd. walked away with the coveted title of PR Consultancy of the Year at the exchange4media Group’s India PR and Corporate...
Read more
Events

Hong Kong, 24th September 2015: Yesterday was a remarkable evening for Indian PR consultancies as their campaigns were rewarded and recognized at the Asia...
Read more