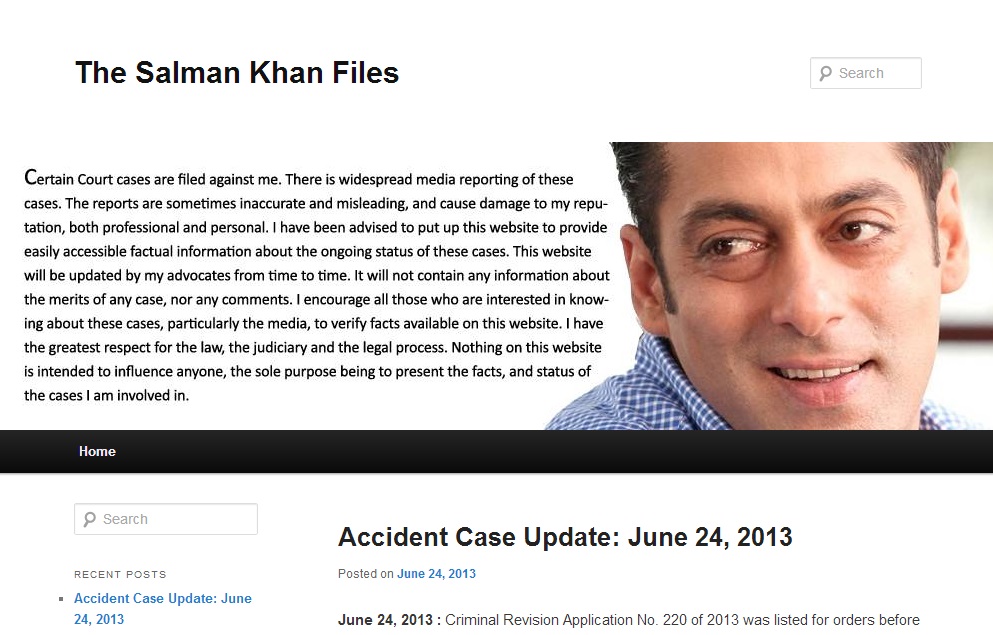 Bollywood Star Salman Khan has a lesson for crisis communicators, but it is yet to prove whether it is the right way to do it or not. If this initiative of the actor succeeds then brands & individuals will find a new way to communicate with masses on the crisis they get embroiled in.

Recently the actor started a blog titled – SalmanKhanFiles.com, primarily to address inaccurate and misleading media reports related to his sub-judice hit-and-run case. The blog claims to update his fans and masses in general on factual information without any comments or the intention to influence anyone.

But this initiative by the actor is also seen as concept of court. Activist Hemant Patel, has filed a complaint against the actor seeking action for launching a website with information on a case that is sub-judice.

As per the report filed by Nikhil Pahwa of Medianama, a web portal covering digital and telecom, says, “Strategically, it appears to do two things – control the conversation and reduce the distortion by being a primary source of information, and make that information available to everyone. Typically, facts get distorted or lost in the Chinese-whispers that is modern day reporting and re-reporting (not based on primary information; similar to blogging and re-blogging), and Khan is attempting to reduce the number of layers (and hence distortion) between himself and the reader. The way TV in particular works is that it often to blows things out of proportion while trying to garner eyeballs and TRPs.”

So the question to all crisis communicators is – Can brands, individual adopt this route to directly inform the publics bypassing the media, even when the case is sub-judice? The media any which ways reports the proceedings of the court (sometime even in the distorted or with a biased versions), so can the brand or individual inform their stakeholders what happened in the court? Or it is contempt of court. Can this be seen as another tool of communications during crisis?

Your answers can be teach us something that was not known to us. Please respond