The Fine Art of Constructive Criticism 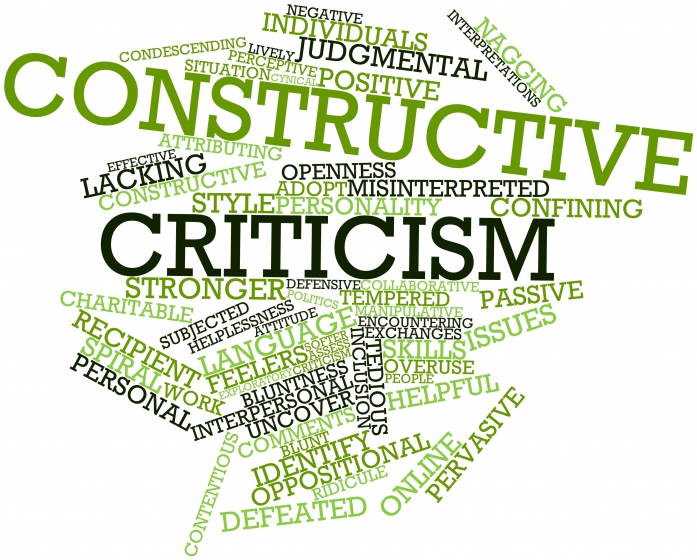 If you overdo it, you make enemies. If you avoid it too much, you become a pushover.

Often in your work life, you will come across people who either keep criticizing you for every small mistake/s without offering any solution to correct the mistakes or there are people who are at the butt of everyone’s criticism. Also there are chances that you unknowingly/knowingly have developed the knack of criticizing everything that comes your way. There are also situations where you want to criticize someone, it could be your boss or your co-worker but you are too sweet to confront them and suffer eternally.

One of the toughest parts of being an effective manager is communicating criticism, to your higher ups, colleagues or to your subordinates. If you’re too harsh, they’ll react emotionally and won’t hear you. If you’re too vague, they won’t hear the message. The first thing you want to do before critiquing someone or their work is to ask yourself “if it’s really necessary”. Determine if what you feel you need to say or do really warrant a correction. Most important think atleast once before you pounce.

There are some immortal golden rules that one can follow in some situations, when it comes to using the weapon of criticism. Following are few examples

1)      You think your boss is too critical about you, the first thing you should do is to take time to analyze if you are actually at fault. i.e., you come in late or are improperly dressed or miss deadlines then face it. It’s you who needs to change.

2)      If you think your brilliant ideas are not accepted, while the ideas presented by your boss in the pitch presentation or quarterly plan really suck. Start correcting the situation by appreciating something good about your boss’ dumb ideas (however difficult it is, do it), then tell him how your ideas can add value to the pitch/plan (but those should be really good, don’t be too self appreciative)

3)      If you think you are suffering from injustice or some kind of bias or you are not getting your due and someone else is merrily enjoying. Use a two-fold strategy: highlight the injustice; while at the same time do not come across as a whining loser.

Use the ’hurt feelings’ argument, tell him that the situation gives you a bad feeling, suggest a likely resolution and also keep in mind that you would be ok with it if there is a fair (and professional) justification for that. You could also ask for his specific suggestions to improve the situation.

Do not attack any individual (either the boss or the guy who is the beneficiary of the injustice).

Example: I really feel bad about the fact that I am not given this awesome client to manage. I really wanted to be on something like that I had discussed this with you some months back. Could it be possible for me to be a part of it now?

If the response is positive, then you have made your way.

If not then prod him for a reason (“I really want to understand so that I do not miss out on any such opportunities in future” or its variation). If the reason is genuine and fair, let it go.

If however, the reason is vague or non-professional and you are convinced this happened only because the other guy is your bosses’ drinking buddy, smile and  thank your boss, come out of his cabin and start looking for a change.

4)      If the colleague is a problem and does something that affects your work, confront him. Explain him about the problems caused to others, most cases, individuals are not aware about the consequences of their actions and when they are made aware, they change. If the problem persists, escalate it. But remember to choose your battles wisely. Confront only on important issues and not on every small problem or else you will come across as a nagger.

Don’t attack the individual or even his idea – just point out how things will improve if he makes few corrections in his work or behavior.

Of course, if his idea is better, appreciate it and gladly come along.

5)      In case  it is a subordinate, then work along with him to deliver better results. Lead by example. If his ideas are not up to mark, then specify your expectations. Explain him why his idea/activity fell short of your expectations and how he could improve it next time. Try and understand the reasons for his underperformance. You need to empower your subordinates to make good decisions, and to feel some autonomy. So don’t sweat the small stuff.

Some things you need to take care while criticizing anyone:

These are just some of the basic tips that can make your work place more productive and team more efficient. If you have an experience that can enhance this, please share for the benefit of this community.

need for holistic uniform measurement systemBy Neha ChandraQ: What is the one question every...
Read more
PR

The freelance workforce in India seems to be on a rise in the last couple of years. More and more professionals are...
Read more